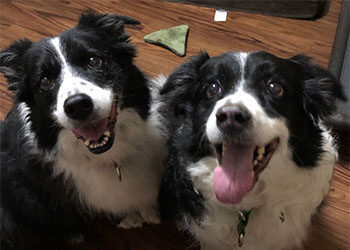 Ash(female-left) and Roy(male-right) are a bonded pair of 9 year old Border Collies. They are being fostered together, and while they are not related to each other, we would like to see them adopted as a pair as they have been together their entire lives. They came into rescue when their owner became ill and could no longer care for them.

They were very loved and well cared for in their previous home and it shows. They have very good house manners- neither will counter surf and they both prefer lying on the floor or a dog bed to being on furniture, even though their foster siblings try to show them how comfy the sofa is!

Ash is quite laid back and a little timid. Roy is a little excitable when there is a lot of action going on, but nothing over the top. Sometimes when he is excited his teeth chatter, and sometimes he will take Ash’s muzzle in his mouth briefly. This appears to be something that they are both used to and he does not hurt her at all. It doesn’t happen often and shortly after, you will see her cleaning his ears!

They are well socialized with both dogs and people. In their foster home they have not been around children under 10 years old so we do not know how they would be with younger kids. They warm up quickly to new people, especially if there is a treat to be had or a toy to be thrown. They both love attention and will push their muzzles into your lap so that you must pet them.

Roy and Ash are used to being around other dogs and pretty much ignore them. In their foster home they have never shown aggression toward the other dogs. They happily play and sniff around the yard with numerous others. Don’t let their age of 9 fool you, they are Border Collies after all and still have moderate energy. Ash loves to play and will insist that someone throw a ball or any other toy for her to chase. She will bring it right back for another throw. Roy on the other hand, may chase the ball so that Ash doesn’t get it, but he doesn’t bring it back. He likes his person to get a little exercise too!

They are both good on leash though they pull a little and are being walked with an ‘easy walk’ type of harness. They are always happy to head out for a walking adventure. In the house they settle quickly and will happily spend an afternoon chilling at your feet while you relax.

Both dogs are around dog savvy cats and mostly don’t interact with them though sometimes Roy will get excited by a quick movement and take a step toward a cat. He can be easily distracted though. Outdoors he would likely chase a cat or other small animal. Both dogs came into rescue quite overweight but with diet and exercise they are slimming down. Their new family will be expected to help them achieve their healthy weight goals.

Ash has some arthritis in one wrist and is taking Dasuquin. She doesn’t appear to have pain as long as she does not play excessively. Roy has had occasional autoimmune reaction to the environment in the past but seems to be stable. He is getting allergy eye drops.

We would prefer a fenced yard for Ash and Roy but it may not be required depending on your environment and routine.

These two are just a joy to foster and are very loved. Their new family will be so lucky to have them.