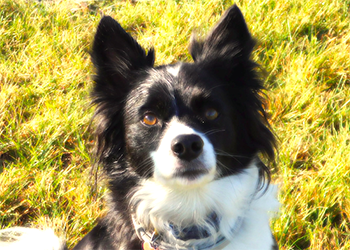 Looking for love……
Beau is a Border Collie mix and petite at only 28 lbs. His small stature is a good thing as he gets high ratings in the lap dog category. He’s very polite and usually waits patiently to be asked or given permission to hop up. Beau loves spending time with his people and bonds closely.

He is crate trained and will go to his crate with a simple point in that direction. Beau uses his crate as a safe haven when there’s too much commotion in the household.

There are a couple things the foster home is continuing to work on. Beau gets so excited when meeting people (he loves everyone) that he tends to jump up on them in excitement. This has improved since entering rescue but he still has to learn to contain his excitement a bit.

Also Beau, how do we put it, can be outspoken at times but basically alert barking. This too is a work in progress but heading in the right direction. In fact, in a quiet household I don’t see this as an issue.

Beau loves attention, to the point it would be best if he was placed as an only dog. You see he wants his humans all to himself and makes sure any other dog that comes close knows how he feels. Off leash outside he interacts and plays with other dogs, but once inside he wants to be the king of his castle.

He may not be a purebred but has some BC quirks like picking up his leash and carrying it sometimes. There’s a lot of character packed into this little guy.  He would love a home with  his people being retirees, work from home or only working part time. Beau is happiest when he is interacting with his people.

If you’re a one dog family Beau could be exactly what you are looking for. He will make someone an energetic, fun, devoted companion.

Since Beau has been in foster care his foster home has gotten to know him better. Beau has been living with a cat. He does try to initiate play with the cat but so far the cat gives a thumbs down. I feel he would do well with a cat that isn’t in competition for his lap time and tolerates his playful manner.

Beau is an energetic little guy with lots of potential. He would make a great addition to an active family or possibly a sports candidate. He’s very biddable in nature and would love to continue further training with a new home. Beau looks forward each day to his exercise time and the variety he is being offered but he also has a good on off switch. The new video gives you a better idea of his personality and capabilities.