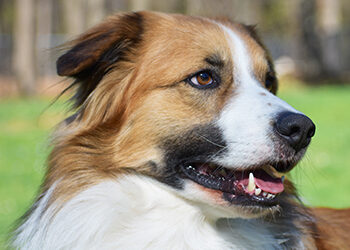 Here’s Jax!!! Jax came to NEBCR in April 2021 as a Border Collie or BC mix, but we are pretty convinced he actually is an English Shepherd.He is 4 years old, neutered and we were told he grew up with a female boxer.

Jax would be the perfect dog for someone who wants a BC-GSD mix! True to his suspected genes, he has a strong guarding instinct and will announce not only visitors, but passers-by as well. He won’t miss anything, unless he is peacefully snoring which he can also do quite well.

Jax is a 9 out of 10, but that doesn’t make him an easy dog. He is reactive to passers-by and will chase anything if given the chance, especially joggers, people on bikes or the UPS truck, so you will need to keep him out of trouble and work with him on that.

Jax is the squishiest dog you could ever wish for! He has no problem with his people standing over him, hugging him or clipping his nails while he is lying on the couch belly-up. He is house-broken, crate-trained, but he will counter-surf if given the opportunity… so don’t.

He loves frozen, stuffed Kongs and tracheas and will enjoy them in great detail.

Jax has lost about 5+ pounds since arriving at his foster home and probably has about 5 more to go to bring him to his ideal weight of approximately 60 lbs.

He walks on leash like a Gentleman, unless he is reacting to a trigger. Squirrels, rabbits and chipmunks are definitely triggers, as well as fast moving people like joggers and people on bikes!

Jax does not need a lot of repetitions to learn and he quickly recognizes a person he knows even in surprising circumstances which is a trait not to be taken for granted.

Jax does not like to be alone and while it’s not an issue of separation anxiety and he can get used to being left in a crate for several hours, he would benefit from having his people around him as much as possible.

He is as sweet as he is gorgeous and doesn’t need to be entertained much, he is perfectly content to just be with you.