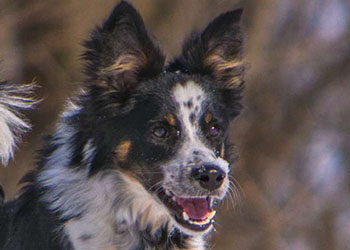 Ozzy is hilarious.  At times, he’ll get three toys out of the toybox, and figure out how to play with all of them.  He’ll grab a tennis ball and drop it from his mouth over and over again, and keep going after it.  All the better if his human is willing to throw it for him, but he can amuse himself with it as well.  Outside, he loves to catch balls or frisbees and is very athletic.  He loves hard chew toys; he puts them on a towel or throw rug on the floor, bundles and wraps the towel over it so the toy is hidden, then takes the time to dig it out and retrieve it!  If he has had too much time without human interaction, he makes a little barky whine to let you know it’s time to step up to the job, and he almost seems to smile when he gets your attention.

He is an expert counter surfer.  Once I caught him with his head sideways in the kitchen sink, trying to grab a leftover.  Another time he got to an unripe avocado and ate all but the skin and pit.  Lesson learned – put everything up high.  He does not chew on any household items that I have noticed, but he is a willing partner in crime if the cat gets the cupboard door open to the compost and trash…

At feeding time, he carefully watches me prepare his food.  Because he’s on a special diet, his food has to sit for 20 minutes before I can put it down for him, so I put it in the microwave (not for cooking, just for safekeeping) and set the timer.  He then plants himself  in front of the microwave until that timer goes off, and when it does, he literally drools.  Now I feel guilty using the timer for anything else, because he expects a bowl of food will appear if that noise happens.

Ozzy adores food, but he is on a prescription diet with an additive because he has a lifelong condition that prevents his system from producing the enzymes that extract nutrients from food.  But, with this new special diet he is doing very well, and it has also helped to cut down somewhat on the poop taste testing he seemed to enjoy earlier.  He does still try to visit the cat box for snacks occasionally.  Also, when he first arrived, he drank an inordinate amount of water, but with the new diet that doesn’t happen as much.  He has had some accidents in the house, but I believe he is fully house trained, and that he just needed to go outside frequently because what went in him came out rather quickly.  Just note that he will need to be on the special diet for life, so there is an extra expense attached to that.

He just turned two in July, and is most definitely a COVID puppy.  He is fine meeting one person at a time, but sometimes two people is overwhelming, especially in our home.  In the near future, I’ll take him to meet small groups of people.  Out on walks, he is very interested in other dogs and people, but is also fine staying at a distance. He is playful and mostly respectful with the resident 5-year-old Aussie who is somewhat submissive.  He loves our dog-savvy cat; they actually play together, batting at each other in passing or when the cat is lying on his back and looks ready to play, and sometimes he gives the cat a partial bath.

He is an accomplished snuggler, a very handsome companion, excellent company, and extremely intelligent.  Ozzy recognizes routines very quickly, and although he is very easy going and does not require strict routines, he picks up very quickly on sequences, such as when we are getting ready for work or for bed.  He loves to be brushed, but views it as an interactive event, and willingly grabs his very bushy tail in his teeth and presents it to you to be brushed.

What is he not?  He is not a barker, licker, or mouthy.  He does not have guarding issues, isn’t afraid of reflections or shadows.  What is he?  He is a beautiful, young BC who deserves a loving home that is somewhat active.  He has good recall, but I am still very hesitant to let him off leash without a fence. He walks well on a leash.  He has been crated in the past for up to just a few hours, but he has not been in a crate at all here.  He is very solid with basic commands, excellent at “stay.”  He is still quite thin as a result of his medical challenges, but he has gained significant weight over the last few weeks and this should continue on the current food and additives.  If you think Ozzy might be a good candidate for your home, and have an approved application on file, please contact us.

First, let’s address the medical piece: Ozzy has passed his recent urinalysis, blood test, stool test, and weight check with flying colors. Yes, he still has EPI (Exocrine Pancreatic Insufficiency), but his veterinarian is very happy with his progress and she feels it is well under control and managed with his current diet and additives. He is nearly at ideal weight (just about 2 lbs to go), and his ribs and hipbones are now securely ensconced beneath muscle and flesh. Ozzy has a slight build anyway so he is looking good now!

And is Ozzy ever playful – he’ll play with anyone who visits. He loves the cat, but he is also the cat police, so if the cat gets up on the counter, he has an alert system. Amusingly enough, I feed my cat on the bathroom counter to keep it away from the dogs, and Ozzy has developed a way to get up on that counter via the bath tub to eat the cat food, so I have to work on counter-measures! He doesn’t seem to notice the irony….He is a huge fan of car rides; all you have to say is “car” and he heads there the minute you open the back door. He doesn’t seem to have any trepidation about exploring new places, with or without his dog brother, and he has lost almost all sense of shyness. I truly believe he has a sense of humor – he knows when he’s being a goofball, and it just eggs him on when someone laughs.
Ozzy just loves being around people, is possibly at risk of becoming a Velcro dog. He most definitely prefers having someone home all of the time. He somehow hears my quiet Prius come in the driveway, and when I open my car door, I see his sweet little face looking out the door window (he’s there when I leave, but I truly don’t think he stays there all day!) He has done extremely well when introduced to groups of people, he enjoys playing bitey-face with my Aussie, and he is convinced that eventually the cat will agree to play tug of war with him. He excels at frisbee and ball catching, and I have been letting him off-leash briefly because he has very good recall.

Ozzy likes to snuggle on the bed, but he is just as happy on the floor on a blanket or dog bed, and he is an early riser, probably in response to his medical condition, so 6:30 AM is his usual wake-up time, and that sets him off on a good schedule for the day. If your application is already approved by NEBCR, all the better to consider this dog. Ozzy would fit into most households seamlessly given a little adjustment time. I feel anyone willing to deal with the little bit of extra care the EPI diagnosis takes will be well rewarded with this handsome, energetic, entertaining boy.